The Cystic Fibrosis Trust (CFT) is the only UK-wide charity making a daily difference to the lives of people with cystic fibrosis, and those who care for them.

Cystic fibrosis is a life-shortening inherited disease, affecting over 10,000 people in the UK. You can’t catch or develop cystic fibrosis, it’s something you’re born with and most cases in the UK are now diagnosed soon after birth. If you or someone you know has been recently diagnosed with cystic fibrosis it can be overwhelming, but CFT can help with information and support.

Like most other UK health related charities, the CFT supporter base is widely dispersed throughout Britain which makes raising badly needed operational funds both arduous and resource intensive. The unique Rentaballoonrace.com Internet-based system is therefore a major asset to the Income Generation Department at CFT because the web eliminates the need for expensive mailshots or face to face meetings between staff and supporters. Everything can be web-based, optimising costs to an absolute minimum.

Harry Lightfoot, a member of CFT’s strategic partnerships team was profuse in his praise when he said

Most significantly, CFT’s latest virtual balloon race, which just finished on Saturday 29th March, was marketed entirely using social media only – no balloon cards or paper flyers were used at all. Twitter, email adverts and Facebook messages were the only sales channels used. 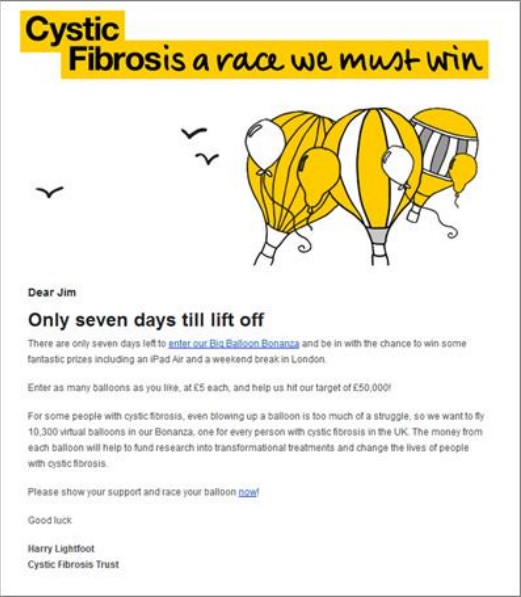 The Trust has garnered over 60,000 likes on Facebook and 16,000 followers on Twitter, so by using their committed supporter base and asking everyone to challenge 5 people to sign up, they were able to reach sales of almost 4000 balloons and gross £20,000
within a short four week advertising window.

And to lightly supplement social media, the Trust issued press releases to targeted local newspapers throughout the UK to spread the word. Similarly, the Trust’s long list of celebrity supporters were encouraged to re-tweet on their own personal Twitter accounts.

Disappointingly, the marketing team tried over the sales period to use Google Ads, only to find a massive click rate but no actual resultant sales from the money spent.

For more details about the Cystic Fibrosis Trust, disease causes, what it’s like living with the condition, how care is delivered in the UK and lots more information and FAQs, visit www.cysticfibrosis.org.uk.